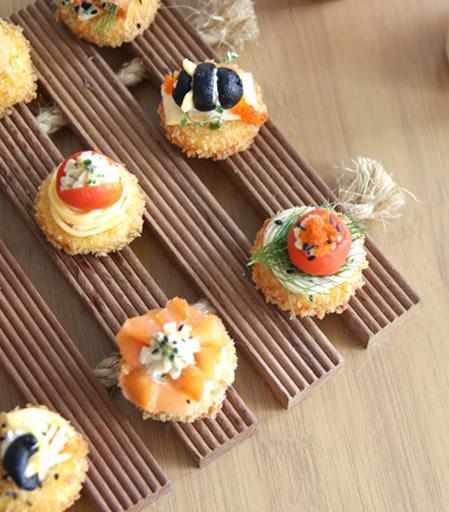 You may have seen the cake-like appetizer served with cheese spread and smoked meat on top. Maybe it is canapé. Canapé is a variety of open-faced sandwich. It is called an open-faced sandwich because the fillings, such as cheese spread, vegetable, and meat, are served as toppings. The bread is only used as a base. Canape is served in pleasing small sized shapes. Canape has bite size.

Canape is served as hors d’œuvre or appetizer. Canapé is very tempting, as the cheese spread, meat, or chilled fruits are served in a tantalizing presentation. Canape is served as hors d’œuvre, or appetizers with various shapes and flavors. Canape consists of three parts. First, the base – which is commonly made of bread shaped into biscuit sized and toasted. The second part is the spread. Cheese spread is commonly used for filling, but you can also use margarine, butter, or mayonnaise.

The third part of canapé is the topping. The toppings can consist of cheese slices, boiled eggs, salmon, shrimp, meat such as smoked meat or sausage, and various vegetable and fruits. The use of cheese spread as canape spread will mix nicely with fruits, vegetables, or meat. Cheese spread as canape spread will also improve the taste and increase your appetite. Adding cheese spread, will also make your canapé more eye-pleasing.